The content of this post is also available as a sleek (super shareable) infographic! Check it out.

Digging through three years worth of customer data revealed that nearly 20% of all Celery launchers and pre-order sellers go on to raise venture capital. To put this into perspective, the Small Business Administration and PWC MoneyTree, estimate that of the 600,000 new ventures started each year in the U.S, only 300 of them (or .05%) will ever receive venture capital.

We thought that our seller’s success at securing venture funding was incredible, so decided to dig a little deeper. Could we, Celery, have some sort of venture capital midas touch that we endow upon our sellers? It seemed like a bit of a stretch, so we crunched our data for insights. What more could we learn about the incredible 20%—those who use our platform and launch way more than just products?

1. You Can Win From Anywhere

As businesses move online, increasing numbers of cutting edge companies are flourishing outside of the traditional hubs. Although Silicon Valley remains the tech mecca, other cities within the US and around the world are developing booming startup ecosystems of their own.

Take a look at the geographical breakdown of our venture-backed customers. They’ll prove that you don’t have to be sandwiched between the Googles and Ubers to crowdfund your way to the top. 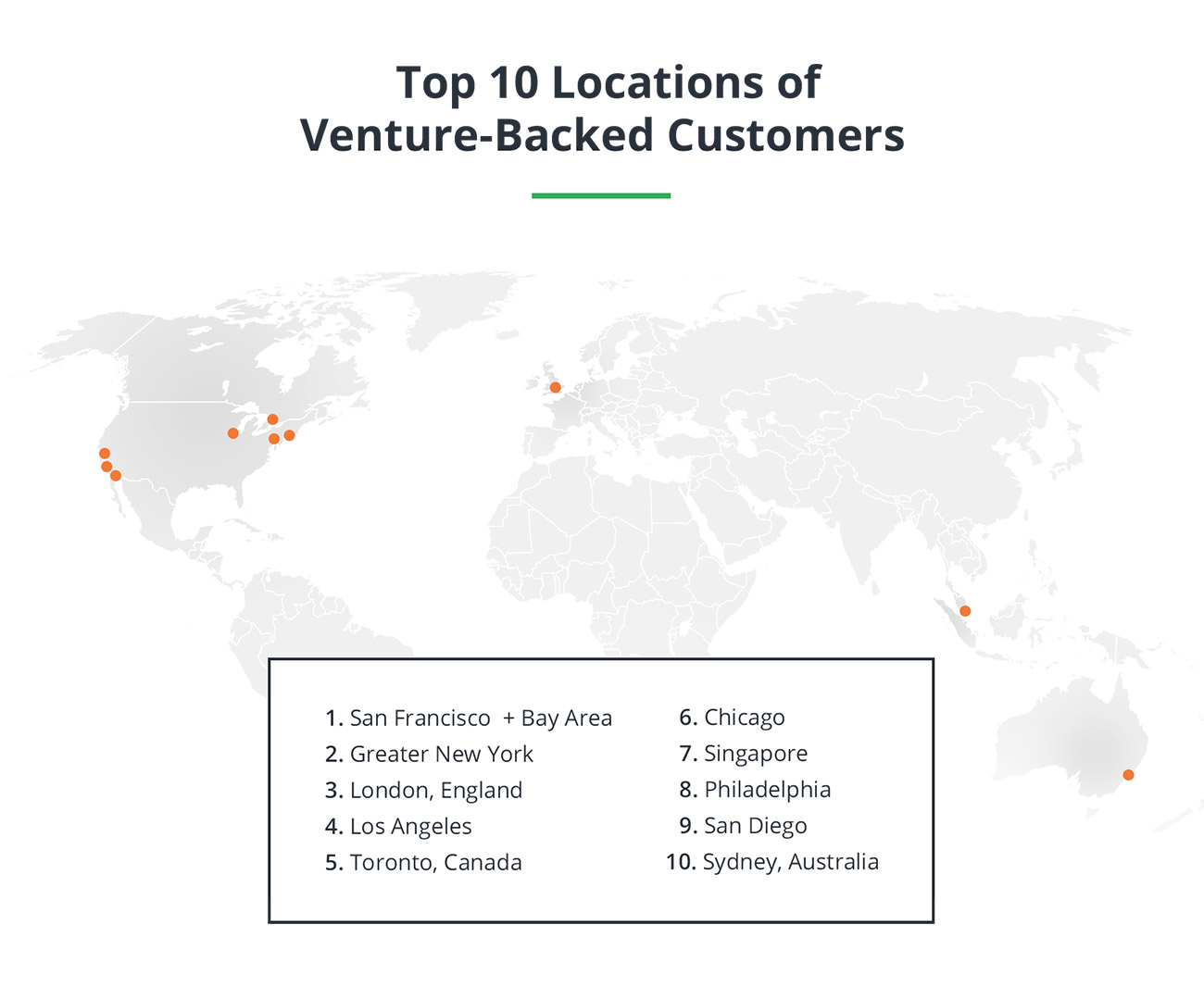 The value that graduates receive from incubator programs is broad, but include the ability to move faster and spend more on marketing an explosive launch. As a result, graduates that crowdfund don’t just typically earn more from the crowds, but tend to raise more venture capital than those who’ve bootstrapped their brands without formal assistance.

Incubators and accelerators also represent the classic “chicken and egg” argument well. Was a great idea accepted into program because its trajectory for success was undeniable? Or did that innovation thrive because of the funding, networking, scrutiny, and guidance provided? In a recent interview with Sanjay Dastoor, founder of Boosted Boards, we asked about the importance of accelerators when it came to Boosted’s success (Celery graduated from YC in 2012). Dastoor responded, “Programs like YC and StartX were important in how we launched and grew. They helped us think about raising funding and developing long-term customer acquisition channels beyond crowdfunding. This has been vital to our success.” 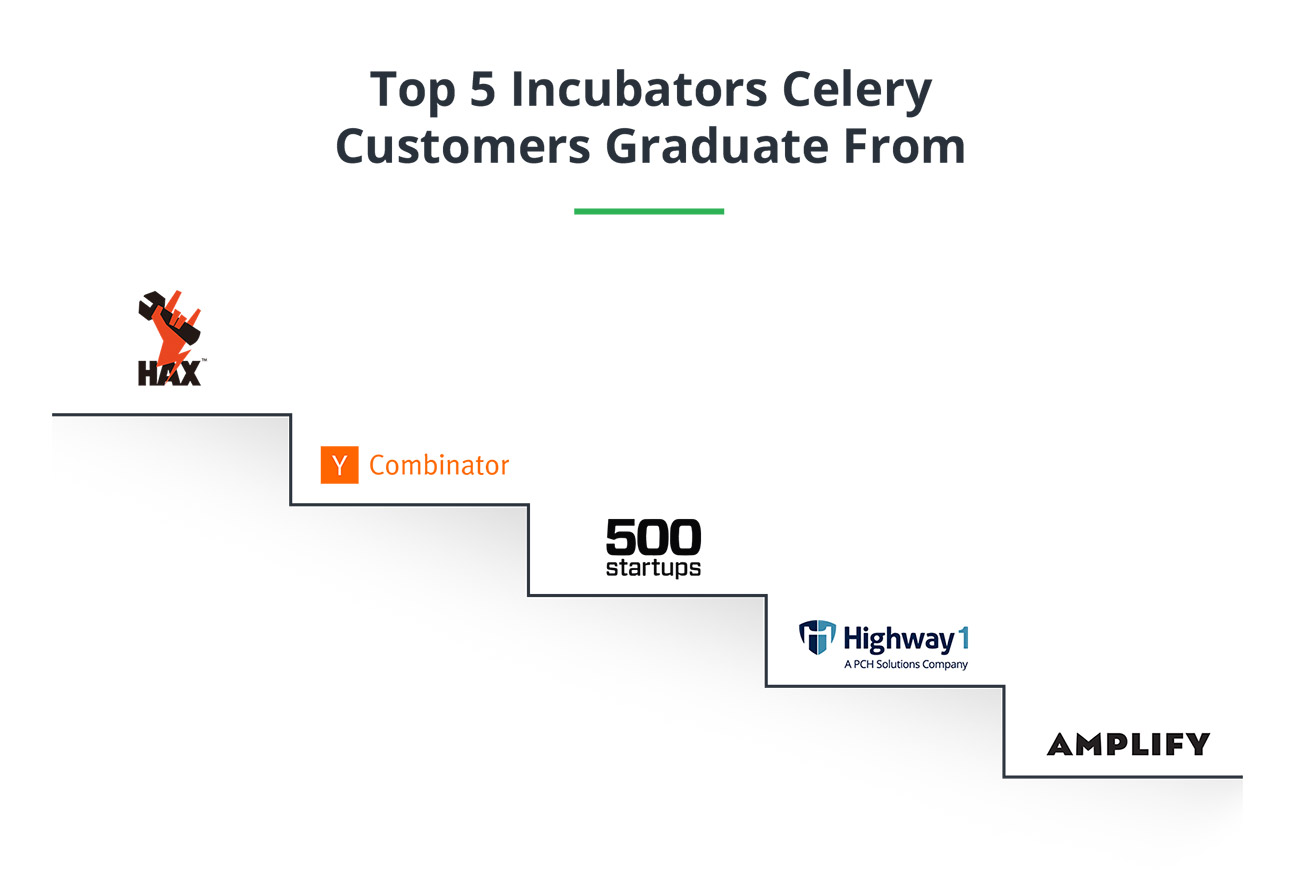 Although there isn’t a golden rule when it comes to the “right team size” there are numerous studies that repeatedly peg optimal team numbers in the 5 to 12 person range. As Jennifer Mueller, Wharton management professor and author of “Why Individuals in Larger Teams Perform Worse” suggests, “After about five people, there are diminishing returns on how much people will pull”. VC firm, Bolt, echoes these findings determining 8 employees to be the “magic number”.

Yielding the greatest results with one’s limited resources is the name of the hustling startup’s game. According to our data, an overwhelming majority of Celery customers with venture backing have teams comprised of just 1-10 employees. An interesting finding, but why? Is the small team phenomenon reflective of when our platform intercepts companies in their growth cycle? Or are small teams more efficient at growing companies and securing venture capital? What do you think? 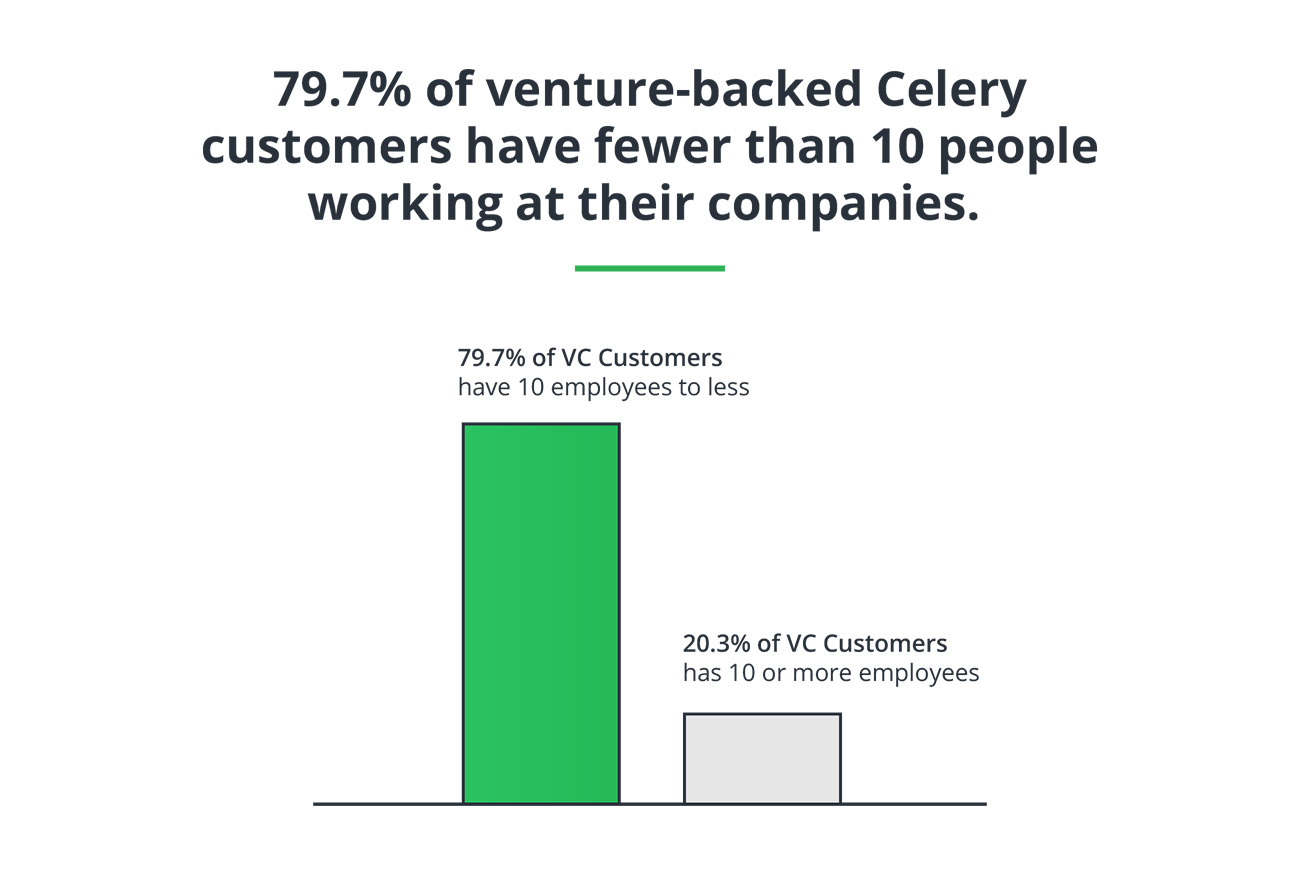 Many of the highest funded crowdfunded projects in history have worked with Celery. Some of these big names include Pebble, Coolest Cooler, Nebia and BauBax. But, when it comes to building a sustainable, big business, it’s not just the crowdfunding dollars that count. In addition to being crowd-crushers, Celery customer’s raise on average $7.1M in venture capital funding, or a median amount of $1.7M. 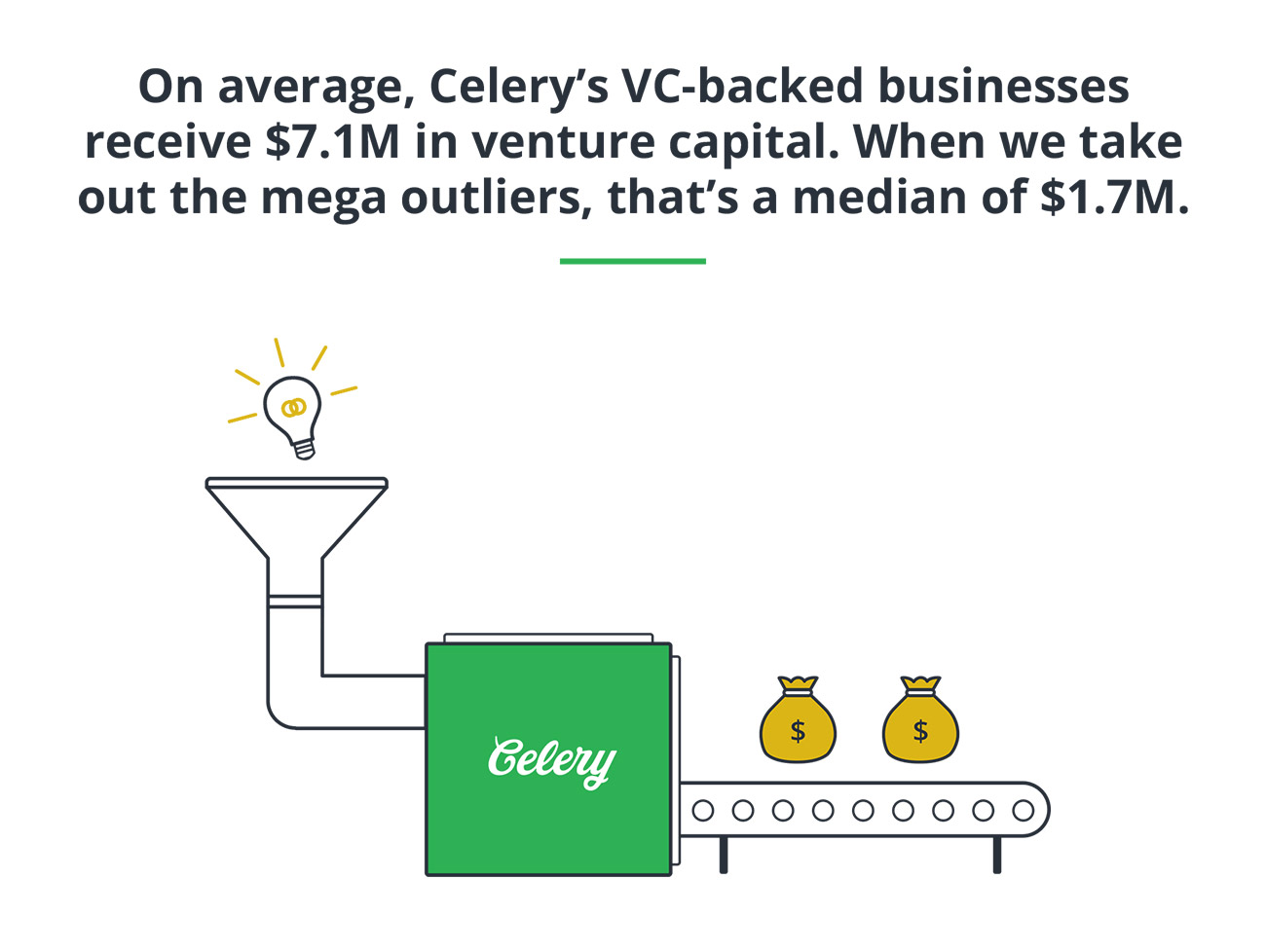 Celery customers have secured more than $500M in venture capital funding—that’s a lot. A 2014 CB Insights report found that of the 443 hardware projects that crowdfunded $100K+, a total of $328M in VC funding was raised amongst this top-tier group. Significant cash falling into the hands of $100K+ crowdfunders is a pattern that we’ve seen repeated with our own customers.

In fact, of Celery’s top 20 VC backed companies, 100% earned more than the $100K benchmark in pre-sales or crowdfunding. But why do successful crowdfunds earn top-VC dollars? Well, to name a few reasons, they’ve proven market fit and demand, have captured serious sales, and have essentially derisked a VC’s investment. 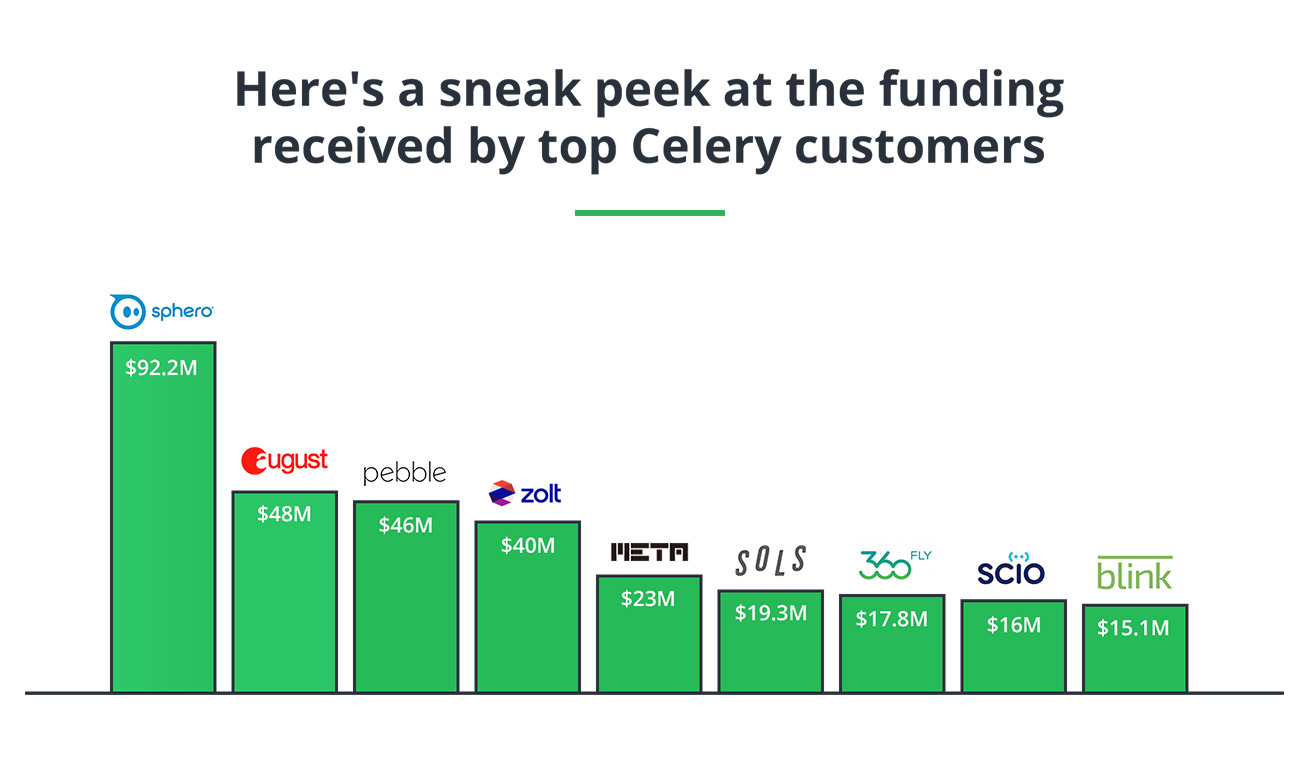 6. Success Comes in All Shapes and Sizes

Crowdfunding on a public platform like KickStarter or Indiegogo isn’t always the right choice for everyone. Take for instance, Lockitron, a home smartlock that raised millions through independent crowdfunding after they weren’t allowed on Kickstarter.

Celery launchers don’t fall into one box, but rather cover nearly every product category and then some. To highlight the different types of crowdfunded and pre-order products that go on to raise serious VC cash, we’ve compiled a top-funded category list. Below are the product categories (as defined and self-reported in Crunchbase) of Celery sellers that have collectively raised more than $35M in venture capital. 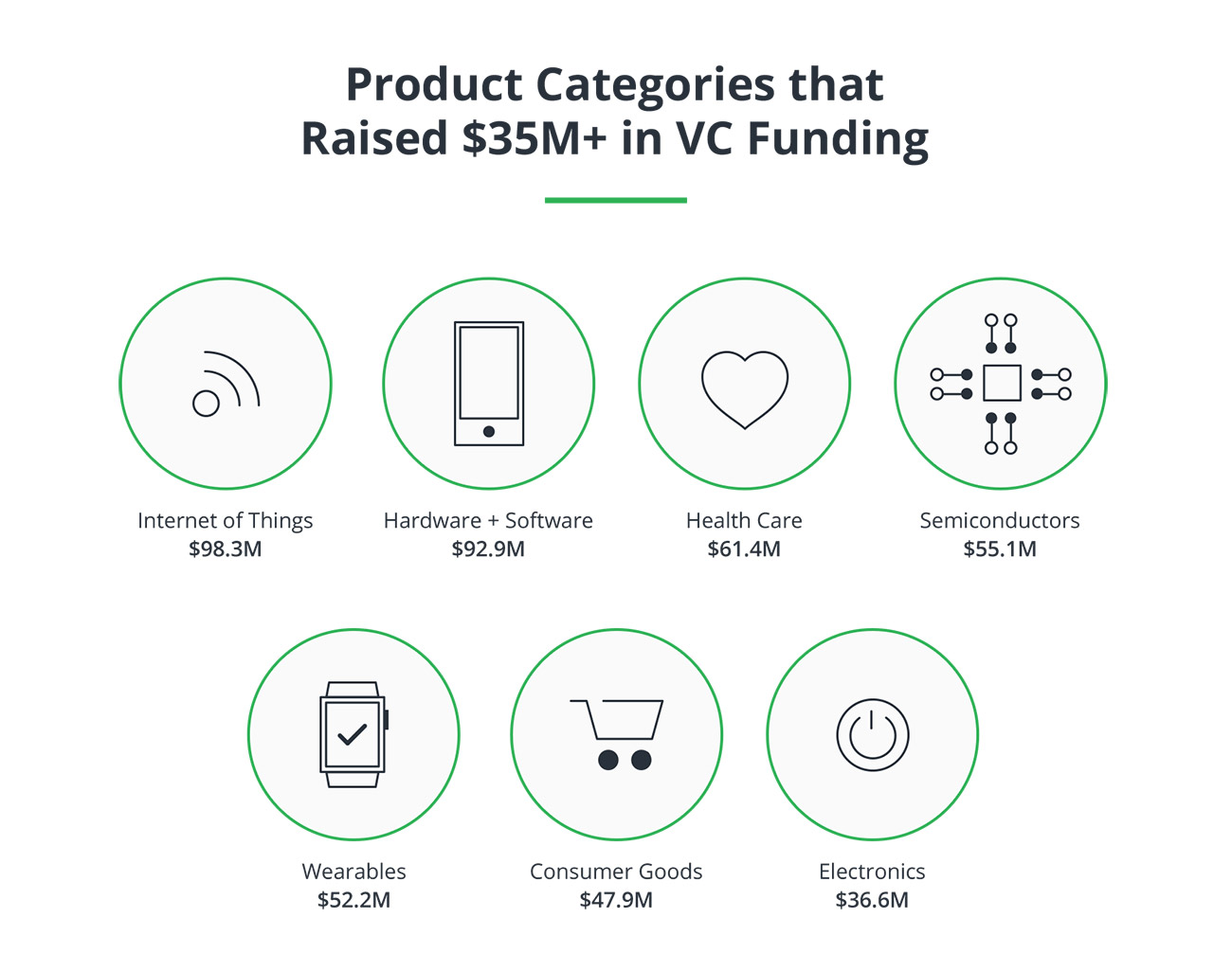 7. You Too, Can Stand the Test of Time

We’ve all heard it before: 90% of tech startups fail. But have no fear, Celery customers aren’t these people. The average company age of venture-backed Celery customers is 3.3 years old. According to Exitround’s Tech Report, companies that pass the four year mark see a dramatic increase in their overall exit value. The report looks at over 200 acquired companies over a six year period and cites a “correlation to more advanced company stature and traction in market.” In other words, substantial exits happen to companies that stand the test of time, and Celery’s VC-backed sellers are aging well.

When it comes to securing investment, we’ve learned a lot about our customers, and even more about how impactful crowdfunding and pre-order campaigns are to both investors and entrepreneurs. The fact that 20% of our total sellers receive an average of 7.1M in venture capital speaks volumes about how today’s businesses are growing; great ideas that are introduced to crowds in great ways beat the odds with more force than a Blackjack card-counter.

Celery has worked with some of the most innovative and trailblazing brands from around the world. We’re proud to have helped so many customers achieve their goals, and we’d love to help you as well.